New Mexico – then and now

I’ve been a fan of Vince Gilligan’s hit series Breaking Bad since it first aired. There were many aspects of the show that appealed directly to me as a writer, not least the setting; New Mexico. I was deep in the process of researching New Mexico’s colorful and varied history when the series’ first appeared and what struck me were the similarities between the New Mexico of Walter White and Jesse Pinkman, and the New Mexico of Pat Garrett, Billy the Kid, and of course, Johnny Fierro.

Walt certainly shares some similar characteristics with William Bonney; loners who are struggling to make ends meet before a catalyst leads them into lawlessness, a certain penchant for chaos and destruction etc. Walt of course is much more intelligent, and has a remarkable skill that he fully exploits when he starts to plan for his family’s future.

But throughout the show, we see similarities between modern and old New Mexico. Train robberies and shoot outs were very much a part of the history of the Old West, and these feature in Breaking Bad. The models of the guns and the trains may have changed over time, but that fabulous New Mexico backdrop remains the same. For me, Breaking Bad is a modern western, and it’s brilliant.

Whilst the definition and reputation of Westerns (the Lone Ranger is a prime example), has changed dramatically in recent years, current series such as Hell on Wheels are bucking the trend. Gone are the days of the good guy wearing a white hat, or Clint calmly gunning down numerous men without ever catching a bullet himself. Modern westerns and adaptations (3:10 to Yuma, True Grit etc.) are seen by many to be more realistic, portraying the old West as a brutal place where every action has a consequence and the good guy quite often winds up dead. Certainly my Devil’s Own series is more based in this camp. Johnny Fierro is morally ambiguous at best, and his hat, figuratively speaking, is a very dark shade of grey. 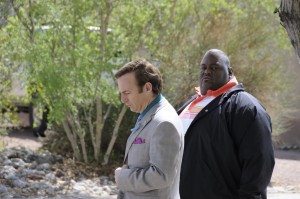 period including Pat Garrett and Bill the Kid. The story made excellent fodder for many of the older Westerns, including The Kid from Texas, The Left Handed Gun (which perpetuated the almost certainly mistaken belief that Billy the Kid was a left-handed gunman – a claim based on a reversed photograph), Chisum and numerous others.

The Lincoln County War in New Mexico was essentially a battle between two rival factions, hungry for power and fuelled by greed.

On one side was Lawrence Murphy and his business partner, James Dolan. Together they controlled Lincoln County through a dry goods monopoly in their store which was the only one in the county. On the other side was an Englishman, John Tunstall, who came to New Mexico planning to get rich by building a rival store and bank with a young business partner, a lawyer named Alexander McSween. They were backed by the wealthy cattle rancher, John Chisum, who owned more than 100,000 head of cattle.

Eventually, after much tension and legal wrangling, a posse of more than forty Murphy/Dolan men murdered John Tunstall. Billy the Kid had been hired by Tunstall, ostensibly as a cattle guard. But The Kid apparently felt great loyalty to Tunstall, maintaining that Tunstall was one of the few people who’d ever treated him well. So the Kid joined a group of about 50 men who called themselves the “Regulators” and who sought revenge for the 24-year-old Tunstall. 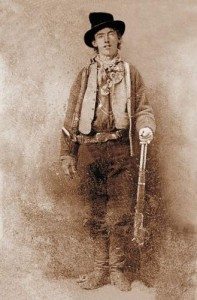 When the war finished, nineteen men had been killed. But the men who had been sympathetic to Murphy and Dolan placed the blame squarely on the shoulders of Billy the Kid. When the governor of New Mexico declared an amnesty for all of those involved in the war, Billy the Kid was excluded. He was charged and convicted of the murder of Sheriff William Brady. Billy was sentenced to death.  But on April 28, 1881, he made a daring escape from custody in Lincoln. During his escape, the Kid shot and killed deputies Bob Olinger and James Bell.  Billy rode out of the town. He was hunted and gunned down by Sheriff Pat Garrett on July 14, 1881.

A huge amount has been written about Billy the Kid’s short life. Myth and fact have become interwoven. Pat Garrett said that Billy “was open-handed, generous-hearted, frank and manly” but not all writers have been so kind. One historian claimed he was just a murderous, little cowboy-gone-bad. Perhaps we should give some credit to Garrett’s assertion – contemporary accounts of events carry credence. But whatever the truth is, Billy the Kid left an indelible mark in the legends of the Old West.